What is the “Suspense File”?

How does a California bill become a law?

What are the deadlines for bills moving through the Capitol (and when will my legislators be home in my district)?

How does Housing CA decide to support/oppose a bill?

What is a Budget Ask?

The process of creating California’s annual state budget lasts from January until June each year. The state budget outlines how the state’s General Fund will be spent.

Requests for funding from California’s General Fund are made during the process of creating the state budget. These requests for funding from the state budget are known as “budget asks” (or “budget plays”). They differ from bills in that they are requests made to legislators by groups (like Housing California), as opposed to being written by legislators (like bills). Ultimately, however, the governor has the final say.

Every January (by the 15th), the governor releases his proposed state budget, which outlines how to spend California’s General Fund. Immediately, the Senate and Assembly begin the process of drafting their own budgets. Groups (like Housing California) that have “budget asks” appeal to legislators to try to get legislators to include their funding for their programs (their “budget asks”) into the Legislature’s version of the budget.

Budget asks then go through a hearing process, but it’s different than the hearing process for bills; instead of starting in one house (Senate or Assembly) like a bill, budget asks are heard simultaneously in both houses by each house’s “budget subcommittees.” Groups with “budget asks” often testify in these hearings to make their case for funding. They explain why their programs should receive money in next year’s state budget. Through this process the Assembly and the Senate craft their respective proposed budgets.

Meanwhile, in April, California residents pay their state taxes. In the month of May, most of the state taxes (which fund the state’s General Fund) have been collected, so the governor has a more accurate picture of how much money is truly available in the General Fund. Using this information, he revises his budget accordingly (by cuts or additions) and releases his revised budget proposal (the “May revise.”)

Eventually, both the Senate and Assembly have their budget proposals. Leaders from each house (the Senate and Assembly), including the Senate President and the Assembly Speaker, then get together, forming the “Conference Committee.” Their job is to hash out differences, negotiate, and come to agreement on a single proposed budget. “Budget asks” that survive this process remain in the Legislature’s budget proposal, which then goes to the governor.

The governor reviews the Legislature’s proposal budget. He has the ability to leave items in the final budget OR strike them with his “blue pencil” (aka “line item veto”.) The governor makes whatever changes he wishes and then signs final budget by June 15th. The budget takes affect July 1.

The following January, it starts all over.

What is the “Suspense File”?

After bills are introduced in the California Senate or Assembly, they are referred and heard in policy committees. Bills with fiscal implications that pass their policy committees move to the Appropriations committee. Any bill with an annual cost of $150,000 or more is automatically be “put on the Suspense file,” which is a holding place for bills with significant fiscal impacts.

Bills that get voted “off suspense” then go to the full Assembly or Senate for a vote. Bills that are “held on suspense” die.

How does a California bill become a law? 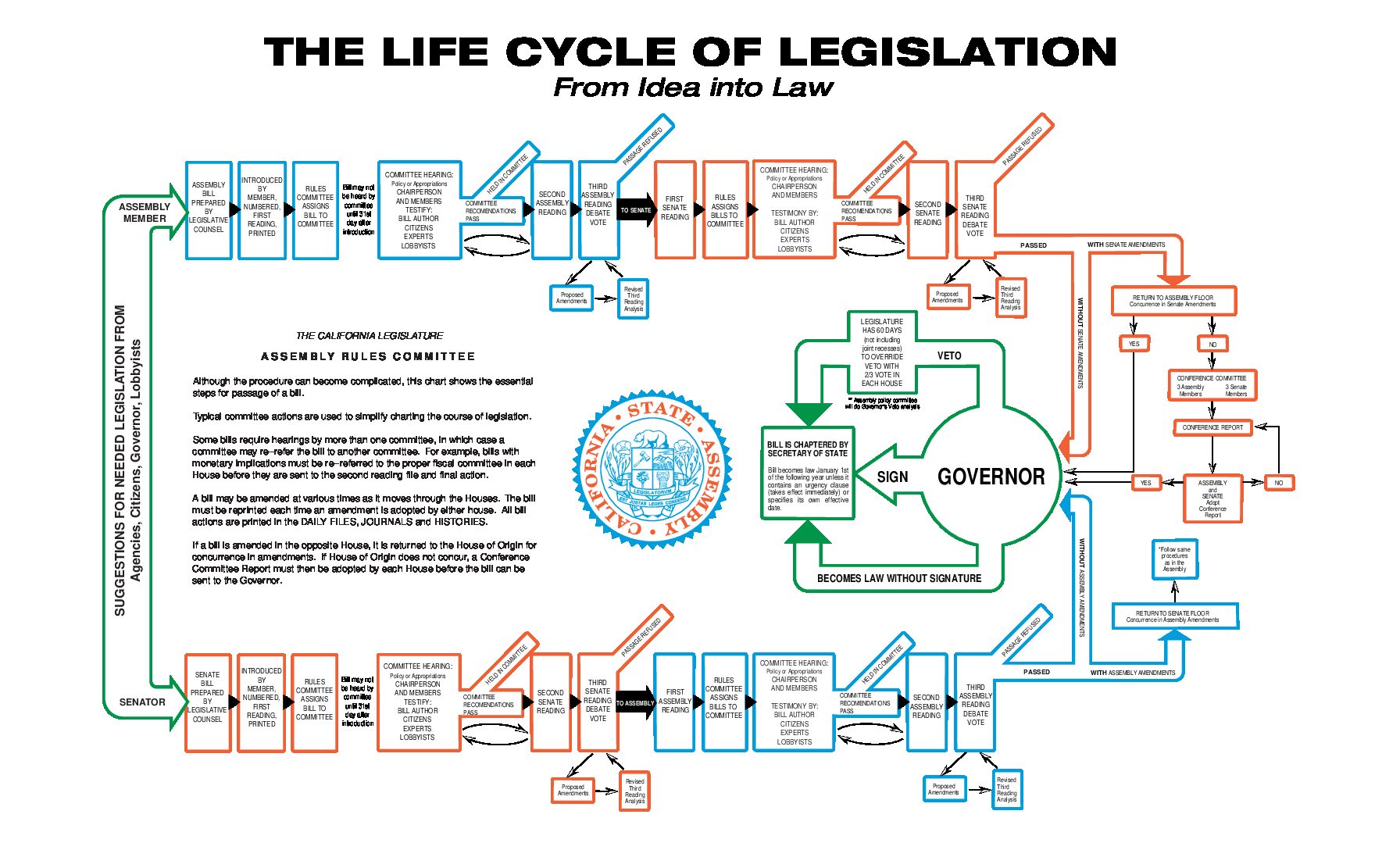 View this helpful graphic showing how a bill becomes a law.

What are the deadlines for bills moving through the Capitol (and when will my legislators be home in my district)?

How does Housing CA decide to support/oppose a bill?

Deciding to support or oppose a bill is an involved process. It requires substantial research and analysis; committee meetings; and countless, in-depth conversations with our coalition partners, members, legislators and their staff, and state departments and agencies.

Our legislative advocates start by reviewing and analyzing hundreds of bills at the beginning of each year and determining which ones should go before Housing CA’s two policy committees — Land Use and Finance or Homelessness. In these committees, our partners weigh in with concerns and ideas for improvement for each bill.

Once we’ve developed our position, we’re off and running in the Capitol and work with our partners around the state to build support (or opposition) for each bill.